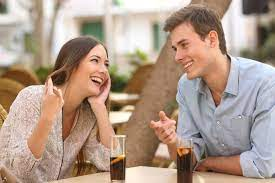 Dating in the Twenty First Century

Oh, how things have changed and how steeply they have dived down the cliff; oh, how sad and sick world society has become. It was not long ago when dating was genuine, and people sought long-term, intimate relationships as a basis of rational, pragmatic living in an uncertain world. In that regard, the person who you married meant everything to you; and, of course, he or she was your best friend. In the article, Should your Spouse be your best Friend?The writer ponders this questions and wonders whether it is a good idea: Not long ago, this sentiment was a foregone conclusion. This demonstrates how far society has wondered away from tried and tested traditional morality. The world has always been uncertain, elusive, and illusive; however, people recognized the need for a genuine, intimate, exclusive long-term relationships: It was obvious to every that such an arrangement is the best and most suitable form of existence and human program. Obviously, that need for genuine, intimate long-term relationships has not vanished away: It is still there and will always be there as long as the world continues to exist: What has changed dramatically is people’s salaciousand licentious attitude towards the sacred institution of human intimacy.

Love and intimacy are cosmopolitan needs:These are needs that are shared by every person in the world; and it was within this context where the fire of sex was shared and enjoyed, preferably within a marital framework. People understood the tremendous value of long-term intimate relationships, and there was a kind of romancing, anticipation, and build-up to that point of the fire. The sparks of love did not fly until the relationship was firmly consolidated; and couples went through that period of genuine joy and love for one another, gradually building up to the point of their first kiss and then the bedroom fireworks that followed.  No one just met and had sex right away; it was just considered inappropriate and downright rude. Most women would have dumped you on the spot if you looked for sex on the first date—or even the second or third! There was an unwritten understanding among people that you do not seek sex early in the early part of the dating process; it was deemed rude and unacceptable—and that wasn’t too long ago: That was just the other day.

All that has changed radically, and today, sex is king; if you are not in the sex rush and immersed in sex, people flee your presence as if you a terminal disease. Oh, how sick and sad that is—what a pathetic change in moral standards. Nowadays, all the rules of morality, decency, faithfulness, exclusivity, and monogamy have been starkly thrown out: Whoredom and promiscuity are the law of the land and rule of the day. Everybody seems to be in a mad rush for instant sex that leaves nothing out. The playgirls and boys today want sex first and talk afterwards. I remember distinctly when I used to argue with God about why can’t people just have sex and enjoy it—what’s all the fuss; but I was just looking at the short end of the stick: Now, I am older and more grounded in the Bible; I am able to see that something is distinctly wrong with the world. I see how nasty and filthy it is to go around driving your penis into vaginas that you have no idea what is there; and even more than that, licking, sucking, and relishing vaginas that may very well be the end of your life.

What is so disturbingly confusing is the fact that the world is riddled with deadly sexually transmitted diseases; and, in view of all this hook-up sex that is going on right now, it is not hard see why more than a million people commit suicide every year. According to one statistic, in France, an average of twenty-men and eight women throw in the towels every single day on their lives: They commit suicide because they see no more reason to keep on living in a dead, meaningless world. It, kind of, makes me wonder if the disturbingly annoying and mad sex craze in the United States today is a form of virtual suicide:It is common knowledge that one in every four people in the United States have a sexually transmitted disease, and one in seven has a deadly sexually transmitted disease. Moreover, the United States is not alone in this damnable doom of sexual pleasure: Asian and European countries are not far behind. It is also common knowledge that virtually no sexually transmitted disease barrier is full-proof; they all embody their own unique form of unpredictability.Condoms, which are about the safest form of medical protection from sexually transmitted diseases, often snap and rip all; moreover, in the hasty, mad rush for that sex; these oversexed, horny sexaholics of today just don’t have time to waste, putting on condoms. In addition, with all the oral sex that is going on nowadays, condoms’ breakage rate does even need to be mentioned.

At the end of the day, what is happening in the United States of America and in many other parts of the world is that people are trying to enjoy God’s world without God. Sex is unmistakably wonderful, especially when both parties know what they are doing; but, in all of that, you wonder why all the rush and sex partner changing—isn’t it the same thing from man to woman and woman to man—isn’t it just like eating; and once you are full, you don’t want anymore? What is so interesting here is that America is much more unhappy than it was when people were more rational and moral in their thinking. Today, America is one of the most unhappy countries in the world; even though it is the richest country in the world. What is true about all this new hook-up sex culture and variety sharing in the United States today is that people are emptier and unhappier now than ever, and they are rushing to kills themselves and others much more readily than before. So, the scenario goes like this: I meet you online today, we set a date for an hour later; I sex you up like crazy; an argument flares up later; I kill you; and then commit suicide in order to avoid having to deal with the police.

Isn’t this the way American society is being conducted nowadays? All shreds of morality have vanished, and people are smack out of their minds.In essence, our society has morphed into a mental aslylum—a crazy house, where everything means nothing, and reality is as fleeting as a straw in the wind. Is this the society that Americans really wanted? —what happened here: What went wrong?How did American society get like this? Who have tricked us into this damnable hell hole that America has become? Where did America go—where did the America that used to be go? And is it ever coming back again? Wasn’t the godlier America of yesteryear much better than what we have today? While there were many hypocrites—and there will always be hypocrites because some people are always going to reach for the shortcuts in life—there were hardly any shoot sprees: Today, people are using high-powered rifles as if they are paper guns. At the end of the day, nobody can understand nor enjoy God’s world without God; and the shooting sprees in America today graphically illustrate this point.

Why Human Friendship is an Illusion